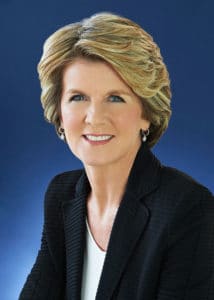 Australian Members of Parliament and Senators, both past and present, have shown their support for those persecuted since the start of the persecution of Falun Dafa (Falun Gong) in China in July 1999. Many have spoken at rallies, supported motions, supported protection visa applications and tabled petitions. In total, over 300,000 signatures have been presented to the House of Representatives since 1999.

The Hon Julie Bishop, Minister for Foreign Affairs stated on September 7th 2015, “The Australian Government considers that China’s ban on Falun Gong and its treatment of practitioners are in breach of international human rights standards…The Government has raised concerns about the treatment of Falun Gong practitioners, and about organs being harvested from executed prisoners, on numerous occasions.”

In addition, successive Foreign Ministers have raised the persecution and related issues with their Chinese counterparts, while there have also been discussions during the Australia/China Bilateral Human Rights Dialogue with submissions having been made to that body by the Falun Dafa Association of Australia Inc. There have also been several presentations and submissions by the aforementioned Falun Dafa Association to the Human Rights Sub-Committee of the Joint Standing Committee on Foreign Affairs, Defense and Trade.

Former Chinese Second Consul Chen Yonglin was granted political asylum by the Australian Government after he defected in 2005. Mr Chen’s revelations gave some indication of the highly organized campaign by the Chinese Communist Party (CCP) since 1999 to disrupt Falun Gong activities and harass individual Falun Gong practitioners within Australia.

He testified that there are over 1000 spies commissioned to spy on Falun Gong practitioners and activities in countries including Australia, Canada and The United States. He also stated how each Chinese consulate and Embassy function of spying on Falun Gong overseas “outweighs all other functions of the mission combined.” This was also confirmed by Mr Hao Fengjun, another defector, who was a former agent in the 610 Office of the Public Security Bureau from 2000 to 2004. Mr Hao stated that:

Motions passed in the Australian Senate

Four motions have been passed in the Australian Senate between December 2003 and November 2016. The first two specifically addressed the issue of the persecution of Falun Gong and included the statement that: ‘the practice of religion should not form the basis of the incarceration of any individual’. The second two motions sought to address the issue of forced organ harvesting.