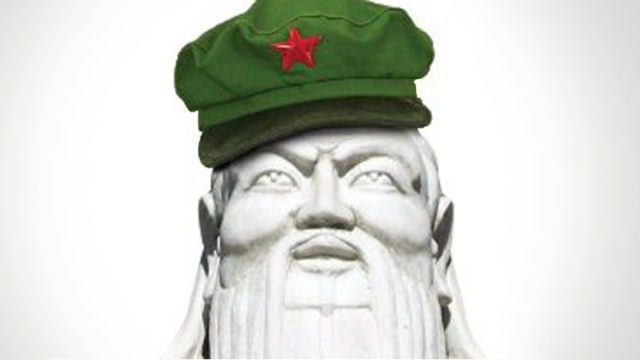 Confucius is everywhere these days. Masses of dancers dressed as the sage paraded about at the opening ceremony of the Beijing Olympics in a show of unison.

His statue was erected on Tiananmen Square last year, opposite a major government building.

Institutes bearing his name, funded by the Chinese state, are popping up at colleges around the world.

It would seem to be good times for the philosopher-turned-cultural-ambassador. He has seemingly found the political audience he longed for, yet never won, in his own times.

But peek under the hood, and something’s awry. Things are missing. Vast swathes of Confucius’s philosophy are absent. His voice, altered.

Gone are exhortations to a life of simplicity and frugality, of delighting in the ritualized workings of hierarchical relationships, of reverence for “heaven.”

Gone too are criticisms of oppressive rule. It was Confucius, after all, who declared to his disciples, “Tyranny is worse than a man-eating tiger.”

The sage is at once everywhere, but nowhere.

Communist ideologues have selectively exorcised the prickly parts of Confucian doctrine in favor of an avuncular parody that has something for everyone, while threatening no one.

The change is more than just an update, however. It is an appropriation for political purposes.

It also bespeaks of a larger, more unsettling question: can traditional Chinese culture cohabit with a China ruled by the Communist Party? Or more specifically, will the Party allow it?

And it knows it.

China’s communist ideology was forged in Soviet Russia, and born out of the crucible of Marxist-Leninist thought—in Europe. In the early 20th century, its atheist doctrines and violent inclinations were imported to, and imposed upon, the age-old civilization of China.

It was a terrible match.

Values that had prevailed for centuries such as propriety, harmony, kindness, and respect for elders were turned on their heads. “Struggle” became the new lingua franca, and violence its hallmark.

While the hammers aren’t seen anymore nowadays, the discomfort with Chinese culture is still there.

Much of what today’s rulers espouse is diametrically opposed to the values, beliefs, and ideals of millenia of Chinese culture.

Tellingly, when authentic expressions of Chinese culture do emerge of their own accord, not mediated or managed by the Party, how does it feel?

Or consider the contrast with Taiwan—a country with Chinese cultural heritage that is not ruled by the Communist Party. There, Shen Yun meets with no such suppression and has instead received official accolades.

All of this sheds a new light, then, on the Party’s adversity to Falun Gong.

In Falun Gong, Party rulers saw their inverse: a body of ideas and practices forged in Chinese antiquity, yet resonant with hearts and minds today.

It was everything Party doctrine was not.

Party doctrine and its ideology of “struggle,” on the other hand, spurred corruption, intolerance, and acts of horrible violence.

Confucius would not be pleased.