Propaganda in the West

Political in the West?

A closer look at the false claim that Falun Gong actively supports or opposes political figures in the U.S. 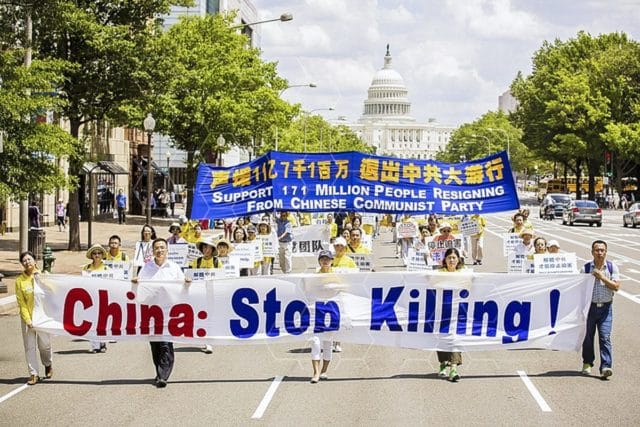 Over the past year, a few media outlets have published stories about the Epoch Times newspaper, alleging the paper is supporting the U.S. President and doing so, at least in part, due to the Falun Gong beliefs of its founder.

Other equally-misleading reports claim Falun Gong itself has certain political leanings in the U.S. or other countries in the West.

There are two significant flaws in these reports.

Two, the narratives alleging political leanings of Falun Gong are wrong, and lack even the most basic understanding of Falun Gong beliefs and practices.

Falun Gong has no political ties

The Falun Gong community as well as Falun Gong’s founder, Mr. Li Hongzhi, have no political ties in the U.S. or elsewhere. In fact, Mr. Li has repeatedly called upon Falun Gong practitioners to not involve the practice in politics. Of course, individuals within the Falun Gong community hold their own beliefs that span the political spectrum, from the very liberal to the very conservative, and everything in between. However, the community of practitioners does not involve itself, as a group or community, in politics, nor support any given politician.

Furthermore, if you look at the support Falun Gong has received, particularly in the United States, it is clear Falun Gong remains entirely a non-partisan issue, as it should be.

Looking at U.S. Congressional resolutions supporting Falun Gong and denouncing the persecution in China (there have been five in total), the co-sponsor list is bi-partisan.

Yet, why do some media allege Falun Gong has distinct political leanings?

In some cases, the CCP is clearly instigating these allegations.

For 20 years, the CCP has sought to discredit Falun Gong in Western society with the goal of marginalizing any voices that expose the atrocities the CCP is committing against people who practice Falun Gong. These efforts include the employment of Chinese consular officials worldwide to spy on and discredit Falun Gong overseas, as well as the widespread practice of political and economic pressure on governments and corporations. This pressure is invariably exerted to force western institutions to discredit, or at the very least ignore, supportive voices for Falun Gong. Much like we’ve seen this past year with the NBA, Hollywood, and other industries, the CCP exerts significant economic pressure on Western media, most of which have significant financial interest in China.

Compounding the problem, however, is a failure of many in the West, including journalists, to understand two principles that play a key role in shaping the beliefs — political or otherwise — commonly held among people who practice Falun Gong.

Let’s look at some examples.

Within the Falun Gong community, you may find elements of belief in the divine and harmonizing family relationships, and wrongly conclude these are “social conservative” ideas, when in fact, they are rooted in a much broader set of ideals that are far better understood within the context of Confucianism — a philosophy that emphasizes symbiotic relationships that are “in harmony” with “heaven and earth.”

Another example: within the Falun Gong community, you may find ideals centered around living in harmony with nature and the environment, and wrongly conclude these are “liberal” or “progressive” ideas stemming from the modern environmental movement, when in fact, they are rooted in ideals found in Taoism — a philosophy that emphasizes remaining true to one’s nature and one’s place in the natural world. It is common, for example, for Taoist paintings to show vast landscapes in which people and their structures blend in harmoniously, almost unseen, with the natural landscape.

In short, to judge Falun Gong practitioners as politically conservative or liberal is entirely misleading. You’d be missing the forest for the trees.

Among Falun Gong practitioners are millions of people who lived through the rise and rule of the CCP. That is, decades in which tens of millions of Chinese people died at the hands of the communist regime.

Most recently and specifically, Falun Gong practitioners became the principal target of the CCP, and for the last 20 years, have experienced first-hand the terror unleashed by the CCP — millions of families have been torn apart by wrongful detentions, imprisonment, torture, and killing. It is this experience that has shown, in no uncertain terms, that the tyranny of the CCP constitutes a paramount threat not only to the Chinese people, but everywhere the CCP’s reach may extend. Therefore, Falun Gong practitioners remain wary of both CCP influence in the West as well as communist elements taking root in Western society, which mirror those found under communist China.

Perhaps more than any other peoples, Falun Gong practitioners are wary because they have seen very clearly where it leads. The deaths of so many of their family and friends remain fresh in their minds.

Bringing together the above two principles — a foundation in traditional Chinese culture and a defensive posture against the tyranny of communism — some common themes found in the values and beliefs held by many Falun Gong practitioners become clear. But these are not beliefs stemming from political leanings, and so do not entirely align with any political party or philosophy.

This is easy to prove. Even the most basic level of research over the past 20 years reveals that these ideas were present among the Falun Gong community long before the arrival of hyper-partisan politics that have become more prevalent in the West in recent years.

In other words, many in the Falun Gong community support principles, not parties or politicians, per se.

To the extent that any government protects the rights of people to peacefully practice their faith, and actively opposes communist influences, you will likely see many Falun Gong practitioners applaud.

To the extent that any government suppresses the peaceful exercise of one’s faith or fails to address the threat of communism, you will likely see many Falun Gong practitioners express their concerns.

Witnessing these reactions, especially in the current, highly-divided political environment found in the U.S. (and indeed throughout the western world), some in the media have wrongly concluded Falun Gong either “supports the U.S. President” or perhaps some say Falun Gong is “against the U.S. President.”

Both of these conclusions miss the mark.

The Falun Gong community consists of people typically united by a connection with traditional Chinese culture, a first-hand experience of communist tyranny, and a belief that Truthfulness, Compassion, and Tolerance are the fundamental qualities of our universe — qualities they aspire to develop in themselves.